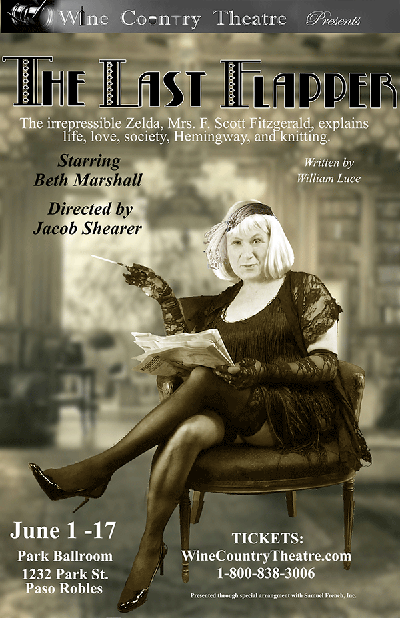 This one-woman show is based on the letters and stories of Zelda Fitzgerald, the glamorous, fun loving and tragic Mrs. F. Scott Fitzgerald who embodies the live fast, die young philosophy. Starring Beth Marshall, as the indomitable Zelda, the play was recently performed in Cambria to great reviews and was picked up by Wine Country Theatre to present as part of our season.

The play is akin to a roller-coaster ride as Zelda takes you through her creative, turbulent, childlike, impassioned pursuit of life through fragmented remembrances. With cutting wit one moment, tangible angst the next, she moves through the past, revealing a rebellious nature that surfaced in the home of her Southern aristocratic parents. Against her fathers wishes, Zelda married F. Scott Fitzgerald, beginning their whirlwind existence and mutual jealousies, all ending with her husband committing her to an asylum and her mental disintegration.

Left unsupervised in a sanitarium, where she has been placed by her famous husband, Zelda breaks into the desk of her psychiatrist, flips through her file, and tells us her life story. She was a cultural icon of the 1920s, the symbol of a liberated generation that made up its own rules. But Zelda also suffered from an undiagnosed form of mental illness, and she constantly felt overshadowed by her more famous, and more gifted, husband. Her monologue alternates sardonic comments about her present confinement and dreamy reminiscences about her adolescence with flashes of anger and resentment, mostly aimed at Scott.

An artist and author in her own right, Zelda finds herself a repressed candle dimly flickering in her husbands limelight, with Scott constantly trying to extinguish or utilize her creativity.

It is her submission of a novel to Fitzgeralds editor that leads to Zeldas institutionalization.

This highly recommended production provides insights into one of literary historys most tempestuous affairs; it also exposes the darker results of shackling an artists emergence. See the play and view how the medical community treated Zelda and any woman who challenged the still evident Victorian expectations. Her first European psychiatrist wrote that the goal was to bring Mrs. Fitzgerald to accept her role as a good wife and mother to her child. Her artistic pursuits were to be limited to hobbies and not career goals.

That Scott and Zelda needed each other and destroyed each other is one of the great stories in American literary culture. On a deeper level, what did their lives say about America, the dream, and the reality?

Set in an insane asylum, Zelda Fitzgerald (Beth Marshall) tells of her life as a Southern belle, of her chaotic marriage, and of her mental breakdown. The entire play takes place within the set of her therapist's office, which Zelda systematically destroys as she rants and raves about falling in love with "Scott," feeling overwhelmed by their party-consumed life together, her own writing and art. She also makes pointed emotional references about her contempt for writer Ernest Hemingway, a close friend of her husband's, and one tearful admission about not being a good mother to her only child, Frances.