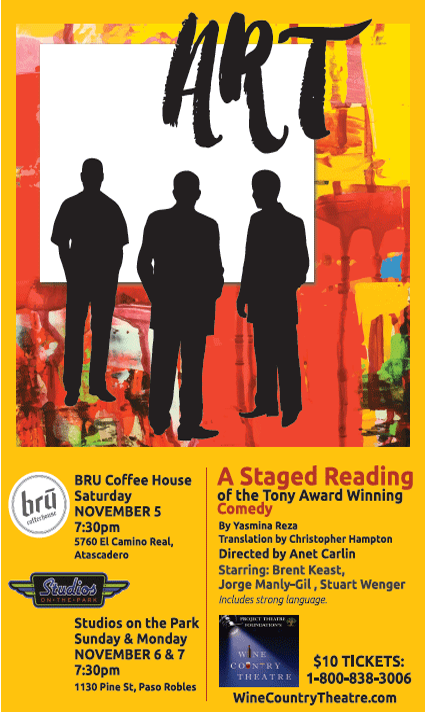 "ART" is a stage reading, which means the actors and director have invested in the work, but they can use their scripts during the reading. Anthony said the play is not completely realized with costumes and sets.

The show has only three cast members: Brent Keast, Jorge Manly-Gil, and Stuart Wenger and is directed by Anet Carlin of Atascadero, who co-founded the Oceano Melodrama and has produced numerous productions locally over the years.

"ART" is about old-fashioned friendship that is challenged by an expensive piece of art. That art threatens to tear them apart. The play was originally written in French by Yasmina Reza. It first premiered on October 28, 1994 in Paris. at Comédie des Champs-Elysées. It was adapted into English by Christopher Hampton and opened in London in October 1996.

"But my imagination can grab on to what these three men are talking about," Wine Country Theatre Executive


Director Cynthia Anthony said. "It's mostly a play about friends and about what art is. Their friendship is challenged because they are bringing up the unspoken things. It's very funny and it's so well-written. And we're excited we're expanding outside the traditional performance."

The reading will be performed at Bru Coffeehouse, 5760 El Camino Real in Atascadero, on Satuiday Nov. 5 at 7:30 p.m. and at Studios on the Park, 1130 Pine St in Paso Robles, on Sunday Nov. 6 and Monday, Nov. 7 at 7:30 p.m. Tickets are $10 each with wine and food available for purthase at each venue. The performance is 90 minutes long and includes an intermission and an informal discussion at the end of the performance.

"This is a showcase for talent absolutely" Anthony said. She warns potential audience members that the show includes strong language.

"Come and support and applaud our experimentation and our growth and expansion," Anthony said. 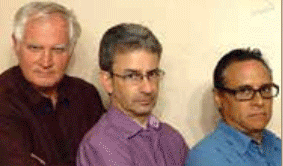 HOW MUCH TRUTH AND HONESTY CAN FRIENDSHIPS STAND?

This is the central question as three good friends debate what is ART, and what are the fragile bonds that hold us together. Brent Keast (left), Stuart Wenger (center), and Jorge Manly-Gil (right) star in Wine Country Theatre's staged reading of 'ART', a comedy by Yasmina Reza, performing at Bru CoffeeHouse in Atascadero on November 5 and Studios on the Park in Paso Robles on November 6 and 7. Tickets are only $10. For tickets go to WineCountryTheatre.com or call 1-800-838-3006.