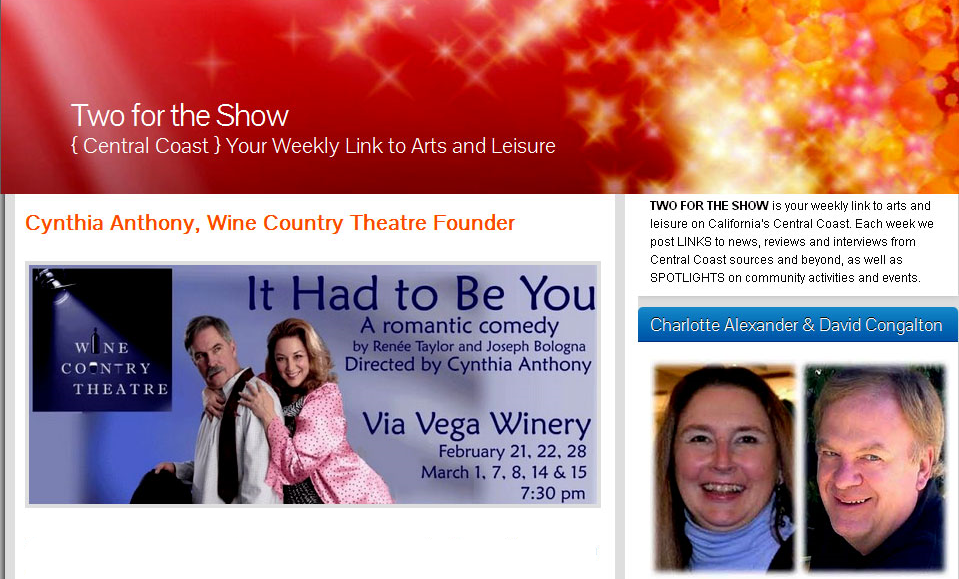 February 9,2014- (San Luis Obispo, Ca)- Cynthia Anthony has been a driving force in local theatre, especially in the North County, for almost 25 years. So when she announces a new theatre company, people take notice. We sure did. Here is what she has to say about launching the new Wine Country Theatre.

DC: Congrats on Wine County Theatre (WCT). How did you come up with the idea?

CA: Versace, the great designer, once said that creativity comes from a conflict of ideas. That inspired me, because I was terribly conflicted about how to create an opportunity to do theatre in North County. I had been doing big musical productions at Centennial Park and talking to my fellow theatre artists about the idea of forming a new company. The park productions were so huge and demanding, for only a two-night run, and the challenge of starting a company seemed impossible. Then I met Larry and April Gomez, owners of Via Vega Winery, and we began to dream. We began discussing the option of building a stage in their wine warehouse. I honestly think I said yes to the idea before I even realized how brilliant it was. To perform a play in a winery, while the audience sips the wine in an intimate space, performed by the best local talent with full theatrical production values is possible. Before we could even admit that "It can be done!" we had begun.

DC: What have been some of the challenges you've faced in getting this off the ground?

CA: Securing funding. Right now there is undo pressure on ticket sales to meet our budget. Because we did not start with the typical nonprofit model of attracting funding and donors first we must sell the show to earn back the costs. I do believe it will be easier to approach donors once we have some kind of track record and visibility.

DC: You've been involved with numerous local theatre companies over the years. What basic mistakes have you learned to avoid in starting up WCT?

CA: I've learned to be very careful about who to partner with. I've learned not to make promises I can not keep. I've learned that starting small is fine, and less stressful, and that I do not have to fear. If Wine Country Theatre becomes important to this community, great! If we take longer than expected or find that we can not garner the needed support, that's okay too. I will always find a way to pursue my passion for theatre and arts education. This is an incredible opportunity that I count as a blessing. It is not a guarantee. It is not my defining work as a human being. Although it is very important to me, I must approach this with a tender grasp.

DC: How has the local theatre scene, especially in North County, changed over the years? I guess some of us expected that all the wineries and the wine crowd would bring a demand for a more sophisticated audience. Has it?

CA: When I moved to the North County with my family in 1991, Paso Robles had a strongly entrenched, well loved community theatre: Pioneer Players. In 1995 I co-founded Classic American Theatre, because we felt there was room for a smaller theatre company that would feature straight plays. We co-existed for almost a decade. As the cost of commercial rental space increased in downtown Paso, Classic American Theatre lost its lease. Dance and music are doing fine up here, as are the youth arts programs. The high schools do great shows, but adult community members find it difficult to participate in or attend live theater in North County. Meanwhile, the wineries have proliferated, and along with it tons of musical acts and unique events. Vina Robles opened their magnificent outdoor concert stage, and there is music of every type and description being enjoyed throughout the area. This proves that there is, indeed, an appetite for live performance here. With the success of the Paderewski Festival, North County locations for Festival Mozaic, Symphony events, choirs and the extremely exciting growth of visual arts spaces, there is a synergy around artistic expression. Sorely lacking are theatrical events. In the recently published Action for Healthy Communities Survey, published by the Community Foundation San Luis Obispo County, 55 percent of North County respondents said they were Very Concerned or Somewhat Concerned about access to cultural opportunities in their community. Because Paso Robles once was home to two live theatre organizations, I do believe the community will support a new theatre company. As our prestige as a wine region and destination increases, so will the demand for live entertainment.

DC: I know you're starting out WCT by keeping things simple, but what's your long-term vision for the company?

CA: My long-term vision is to develop a community of theatre artists and audiences that can sustain an on-going production company. I am not interested in starting a capital campaign, but if and when a performing arts venue is built in Paso Robles, there will be a core group of artists and an established audience. We want to be ready for that opportunity! In the meantime, I hope to continue to do shows in various wineries, including musicals.

DC: Why did you choose It Had to Be You as your opening show?

CA: It is a delightful, funny show that requires two outstanding performers. I wanted to start with a small cast, single set show. It Had to Be You has been successful for decades all over the country, because it is well written and entertaining. For me personally, I wanted to pick a show that would be very different from my huge cast shows I have been doing at the high schools. I love teaching and directing young talent, but this chance to work with adult professionals has been fantastic.

DC: What wine will go well with It Had to be You? Any suggestions?

CA: I love the Via Vega wine Dos Amigos. They also have a wonderful selection of port.